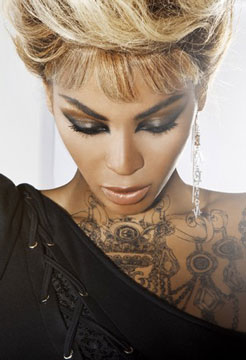 Temporary tattoos are becoming fancier than ever these days, and Beyoncé Knowles is joining in on the action. Beyoncé, along with her mother, Tina Knowles, is set to launch a limited-edition line of Temptu temporary tattoos through their Deréon label.

The line's Fall 2010 ad campaign featured images of Beyoncé sporting some serious ink, and the mother and daughter duo wanted to make the intricate designs available to fans. "With a sixties-pinup-girl meets-futuristic-biker-chick theme, Beyoncé and I really wanted to give our Deréon Fall 2010 campaign a tough edginess," Tina told WWD. The tats, which launch Nov. 1 at sephora.com, temptu.com, and dereon.com, will feature Deréon’s signature fleur icon, spider designs, jewel baubles, and rocker chains and bolts.

The basic kit ($16) will include two prints of each design, and the deluxe edition ($34) also comes with a photo "signed" by Beyoncé (and the opportunity to win a trip to NYC for a photo shoot). What do you think about B's latest adventure?

ADVERTISEMENT
Beyoncé KnowlesTemptu
Around The Web

Beyoncé Knowles
Yes, Black Is King Is a Reimagining of The Lion King — Did You Catch All the References?
by Amanda Davis 21 hours ago

Beyoncé Knowles
10 Times Beyoncé Pulled Up For the Black Community, Even Before Black Is King
by Natasha Marsh 21 hours ago

Beyoncé Knowles
Music Mood Board: All Things Beyoncé, Because Black Is King
by Brea Cubit 3 days ago

Beyoncé Knowles
From Blue Ivy to Wizkid, See All the Artists Featured on Beyoncé's Black Is King Visual Album
by Chanel Vargas 1 day ago

Naomi Campbell
Did You Catch These Fun Celebrity Cameos in Beyoncé's Black Is King?
by Brea Cubit 3 days ago