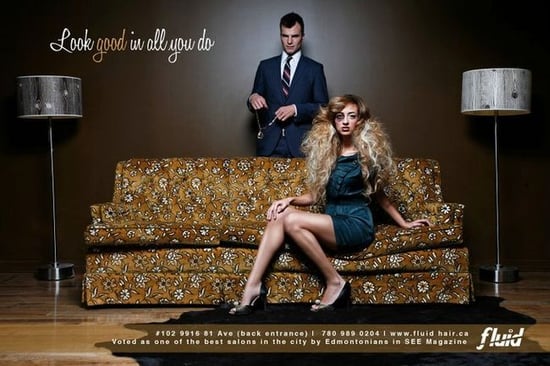 Up in the Great White North, an ad campaign for an Edmonton salon is stirring up controversy. The above advertisement for Fluid Salon, part of its "Look Good in All You Do" campaign, depicts a battered woman and an American Psycho-style man holding a sparkling necklace. Sure, she might have a black eye, but at least her hair is styled! Ugh. After Copyranter called out the ad for its domestic violence theme, a flurry of criticism followed.

The salon's response? Get over it, basically, and stop picking on us. It's art, Fluid creative consultant Tiffany Johnson writes, adding that boycotting the salon won't stop domestic violence. It's a non sequitur, though; nobody's saying that domestic violence will end if people stop going to Fluid. Instead, critics argue that using a "hot battered woman" (the salon owner's words) makes light of the partner violence faced by one in four women. Sure, Fluid has the right to advertise any way it wants, but people have just as much right to comment on it — and judging by the uproar, Fluid is finding this out the hard way.