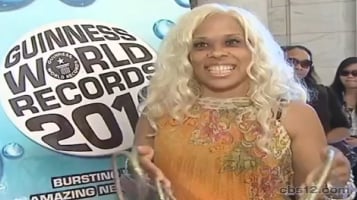 Chris "The Dutchess" Walton was recently named the Guinness World Records 2012 holder for longest set of fingernails in the world, with nails that reach over 10 feet long on her left hand and nine-and-a-half-feet long on her right hand. It's taken her 18 years to grow her impressive set, but Walton says that she'll eventually cut them. "I'll do it, but I just can't see it in my head. I'm so used to them now that they feel like a body part," she told reporters at the Guinness announcement in New York. Want to see Walton's nails in action and hear what activity she finds hardest (you'll never guess)? Then just keep reading.