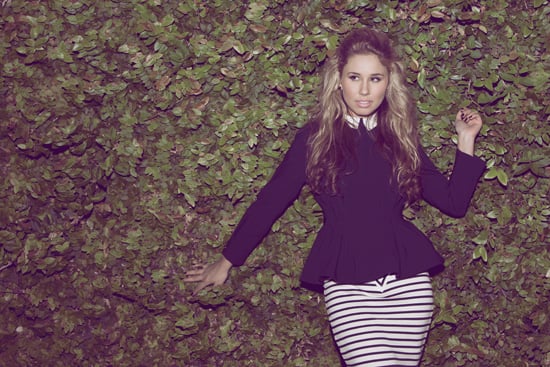 It's been quite a year for songstress Haley Reinhart. Not only did she release her debut album Listen Up in May, but she also performed at Lollapalooza earlier this month, becoming the first American Idol alum to ever take the stage at the festival. Those "two weeks of madness" as she lovingly called them may be over, but Haley shows no signs of slowing down. In fact, she's planning a US tour for the Fall. "I was born into the world of music," she says. "I know now that it was my fate and destiny to follow through with this career."

Somewhere between the tours and albums, Haley is managing to make a name for herself in another way: a singer with a highly approachable beauty aesthetic. Find out how Haley cultivated her sense of style when you keep reading.

Haley pulls a lot of her inspiration from the '60s and '70s. "I love that clean-faced, but very sun-kissed look," she says. "I like to get my hair as big as possible. You gotta have the big hair!" And aside from a little liquid liner, mascara, and blush, Haley keeps her everyday makeup look fairly simple. Her favorite product at the moment is a plum-colored MAC lipstick. "It's called Rebel, so that makes sense," she quips. Haley's had her share of cringe-worthy beauty moments, though. She remembers her sixth grade photo where she styled her hair completely slicked back and oiled down to her head. With a pair of huge hoop earrings and white eye shadow up to her brows, "I looked like J Lo Jr," she said with a chuckle.

But for Haley, the word beautiful means more than just makeup. "There's just so many ways to be beautiful," she says. "I think being beautiful is just being very positive and just letting your true colors shine through." This sentiment goes hand in hand with her overall philosophy, which she gives as advice to other young girls who are following dreams of their own: "If you're not believing in what you're doing and who you are 100 percent, you can't expect to get the world to believe in you," she says. "I've always believed in that."