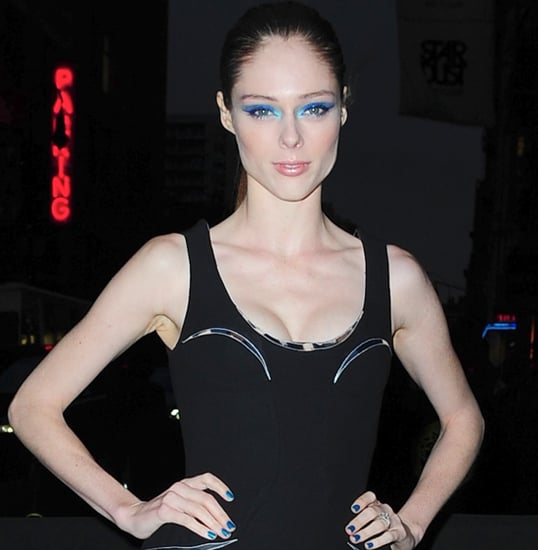 Highlighter-bright eye shadows are more wearable than you'd think, as demonstrated by Coco Rocha's surprisingly attainable two-toned palette. Her electric blue shadow, paired with a slightly winged liner and matching blue nails, looks cool and not the least bit tacky. The secret? Use the same rules that you would use with any other shadow.

Coco started off with her base color, a stripe of bright azure blue similar to Bobbi Brown Shadow in Blue Bell ($21), which extended from the beginning of her lash line past the outer corner of her eyes. She then blended a lighter shade of blue into the inner corner of her eyes, as you would a white shadow with a neutral-colored palette. The white shadow along Coco's lower lash line helps to open them, keeping her overall look from being too top-heavy. Pink cheeks and lips finish the look off. Thinking of trying the look out yourself? Just treat your brights like you would your neutrals, and you'll look modern instead of overdone.

Rihanna
Thanks to Fenty Beauty's Upcoming Launch, Soon We Can All Smell Like Rihanna
by Yerin Kim 2 days ago

Margot Robbie
A Hose, a Kiddie Pool, and Other Products The Suicide Squad's Makeup Team Used on Set
by Danielle Jackson 3 days ago