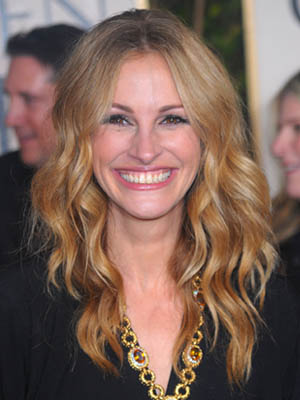 A little rain isn't slowing down Julia Roberts, who looks thrilled to be at the Golden Globes. (Did you catch her dig at NBC? Burn!) This is her first big appearance since being announced as the new face of Lancome, and as usual, she's all smiles. These soft, golden waves are more or less de rigueur for her these days, and this smoky eye is also nothing too out of the ordinary — but you've gotta admit, she makes this look work over and over. Are you a fan, or do you long for something else?

Vote on all of my Golden Globe Awards polls here!