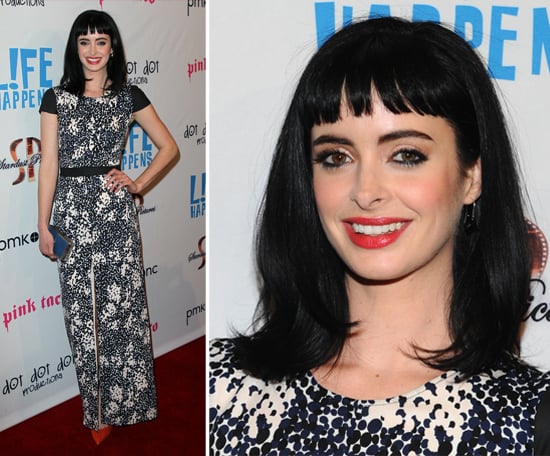 At the L!fe Happens premiere, Krysten Ritter added a blast of color to her black and white Jenni Kayne ensemble by wearing orange-red heels. But it's what makeup artist Amy Nadine did next that took the entire ensemble up several notches. To complement the actress's eye-catching footwear, Nadine created a "strong and modern" makeup look that featured matching orange-red lips. Learn how to get the Don't Trust the B---- in Apartment 23 star's palette below.

To add a flush of color to Krysten's cheeks, Nadine used Obsessive Compulsive Cosmetics Lip Tar in Hush ($14), a pale pink. Then, Nadine swept Chanel Illusion D'Ombre in Emerveillé ($36), a neutral champagne hue, all over Krysten's lids, followed by black liner all along the lash lines. Finally, to match Krysten's lips to her bright-colored shoes, Nadine applied Tarte LipSurgence Lip Tint ($24) in the new poppy shade, Spirited. So if the spirit moves you, give this matchy-matchy technique a try.