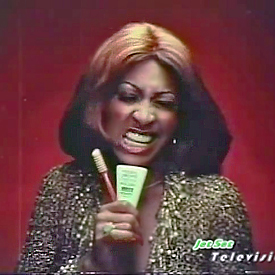 There are plenty of quirky beauty ads out there, some verging on the uncomfortable (anyone else remember having to watch those Herbal Essences "orgasm" commercials with their parents?). Of all the off-kilter ad campaigns that get made, though, there are a few that are truly bizarre and even appalling. Take a look at five bonkers commercials when you keep reading.

Dorothy Gray Salon Cold Cream
Apparently, in the 1950s it was no biggie to smear radioactive dirt on models' faces. At least they wipe most of it off with cold cream after?

Groom & Clean
This is the 1950s equivalent of the Old Spice Guy, except instead of a hot dude it's a mermaid who, although attractive, makes you feel slightly uncomfortable and a little threatened.

Pearl Drops Toothpaste
Ummm, seems like Tina Turner and her toothpaste friend might want to be alone for a while. I'm just gonna turn the lights off on my way out . . .

Kissing Stick by Maybelline
Warning: this ad may cause disco-induced seizures.

Finesse: "Tom, Dick, and Harry"
This thing is so long, so awkward, and so dubious about actually selling Finesse that at a certain point I begin to wonder whether it's a failed SNL sketch from 1989.

Source: 5 of the Most Bizarre Beauty Ads Ever