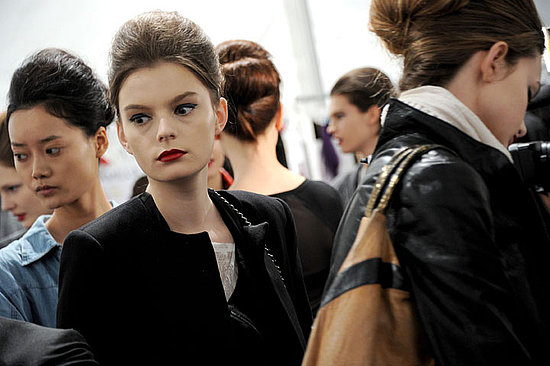 Feminine, delicate beauty reigned backstage at Pamella Roland with a china doll aesthetic combined with an Audrey Hepburn twist. Get the backstage report when you keep reading.

Hair: Lead stylist Paul Labrecque created a voluminous updo inspired by Audrey Hepburn’s Holly Golightly in Breakfast at Tiffany’s. The look boasts a 1960s bouffant essence with a French twist. "It’s about supreme elegance to match the clothes," Labrecque said. "But it’s fresh — not so staid.” The updo is actually three parts: a bouffant leading into a backcombed chignon winding down into a French twist. “You start with two ponytails,” explained Labrecque. The bottom one is folded into a French twist. Labrecque used rats created from faux hair for the girls with shorter hair to create extra bulk for the chignons. He then used the top ponytail hair to wrap around the rat into a chignon, then backcombed to create a bouffant at the top of the crown. Labrecque used Paul Labrecque Volume Finish and Paul Labreque Daily Style Gel — the former for height, the later to slick back rogue flyaways. “It’s quite a departure from last season’s tight ponytails,” Labrecque said.

Makeup: Matin, global artistry director for Laura Mercier, drew inspiration from China. A red lip and a liquid liner concept are the basis of the look but with a twist. “The liquid liner is graphic and exaggerated,” Matin said. “I wanted to contrast with the flowiness of the gowns to make it a bit younger and fun.” Matin applied Laura Mercier Black Caviar Cream Liner in a big, thick line using a fat lip brush before following up with a coating of Laura Mercier Full Blown Mascara. The effect can also be recreated it with a black pencil or cake liner. Matin took the skin a shade paler, eschewing cheek color and highlighter. He did, however, opt for a cream foundation and concealer with a bit of powder for a perfect china doll look. Laura Mercier Lipstick in Sangria was applied to the lips with a brush, after which Scarlet Lip was layered on with fingers. Lastly, Matin lightened the models’ brows with a layer of concealer for a bleached eyebrow effect.