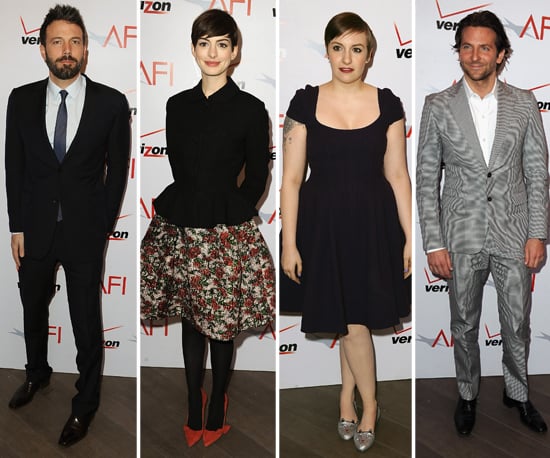 Ben and George Get the 2013 AFI Awards Started

The Critics' Choice Awards were less than one day ago in LA, but the AFI Awards, taking place in the city this afternoon, is continuing to honor the year's best work in film. Ben Affleck, fresh off his best director coup at the CCAs, hit the red carpet along with his producer George Clooney at the AFIs, held at the Four Seasons Beverly Hills. A handful of leading ladies attended as well, including Girls' Lena Dunham, Les Misérables' Anne Hathaway, and Mad Men's Christina Hendricks and Kiernan Shipka.

The arrivals are still taking place — make sure to check back for red carpet updates! The AFI annually honors the best movies and television programs, and Argo, Les Mis, Girls, and Mad Men all made the cut. The full list of 2013 AFI honorees also includes award season favorites Lincoln, Silver Linings Playbook, and Zero Dark Thirty.

Lana Condor
Lana Condor Broke Away From Lara Jean For Her To All the Boys: Always and Forever Premiere Dress
by Karenna Meredith 2 weeks ago