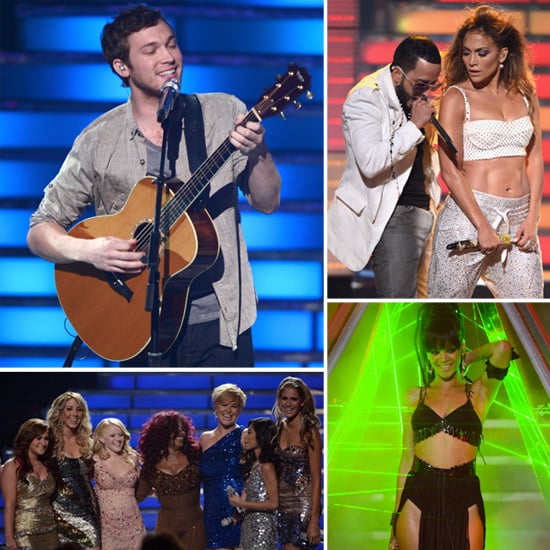 American Idol closed out its 11th season in LA tonight and crowned Phillip Phillips the winner! The two-hour season finale brought out some of music's biggest stars like Rihanna, Chaka Khan, John Fogerty, and Dream Girls legend Jennifer Holliday, who joined finalist Jessica Sanchez on stage for an unforgettable duet of "And I'm Telling You." The judges also got in on the action. Steven Tyler and Aerosmith performed a medley of songs while Jennifer Lopez flashed her abs in a studded bra and got the crowd on their feet with her latest dance track, "Follow the Leader." The evening was packed with exciting moments, including a marriage proposal. Former contestant Ace Young got down on one knee and popped the question to girlfriend, and Idol's season three runner-up, Diana DeGarmo.

Following the results and Phillips's emotional performance of his first single, "Home," he headed backstage to chat with press about his long road to tonight's finale, and how he's processing the win. Phillip said of his big win, "It's so unreal . . . it hasn't sunk in yet, it's just such a blessing to have." Phillip was humble talking about his own success, but Jessica was quick to compliment her competitor, saying, "When they announced it was Phillip I was so happy. I love him so much; he deserved it. He's been having to keep up with his health issues; he's been through a lot more than us, both mentally and physically." Season 11 was full of excitement for the contestants and the judges. However, we'll have to wait and see if J Lo returns for season 12.

Jennifer Lopez
Jennifer Lopez Is on Her Way to Perform at the Inauguration, and Her Outfit Game Is Already 100
by Nikita Charuza 1 day ago

Jennifer Lopez
J Lo's White Gown in Elle Magazine Only Reminds Us of 1 Thing: A Wedding Dress
by Sarah Wasilak 6 days ago

by Nikita Charuza 41 minutes ago