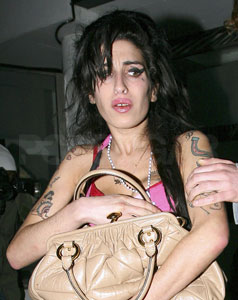 As expected, Amy Winehouse was arrested today in conjunction with her husband Blake Fielder-Civil's obstruction of justice case. Blake was arrested on Nov. 9, after allegedly "perverting justice" surrounding a case in which he beat up a bartender in June. Supposedly, Blake offered the man about $400,000 to drop the suit, yikes. This week, new evidence implicated Amy in the case and today she went into custody as scheduled. Amy may only be the second-biggest trainwreck of the year, but things are going from bad to worse for her. Though, to be fair, after canceling her tour due to being so distraught separated from Blake, maybe she's not too broken up about spending this holiday season locked up like her husband.