Angelina has left Pune but trouble seems to follow her wherever she goes. The actress is now in Mumbai where she is continuing to film A Might Heart (in her mighty wig). She was filming at a school today when her bodyguards allegedly got a little too pushy with the parents and students there. Here's more: 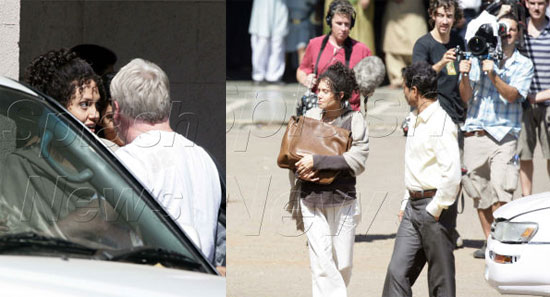 The fracas began when the gates of the Anjuman-e-Islam school, which had been locked during filming, were opened to let the parents fetch their children.

Patni, who has two children studying at the Muslim school, said "mothers were also shoved aside by the guards."

Dallington TV, a British production company that organized the shoot, blamed the scuffle on photographers and television cameramen that it said rushed the school to get pictures of Jolie.

"We had the full permission and cooperation of the school to film on the premises," Dallington said in a statement. "When the gates were opened to allow the parents in to collect their children, the paparazzi rushed the school causing confusion."

It sounds like no one got too hurt in the scuffle. Still it's got to be disheartening for Angelina that people keep getting hurt over her. Hopefully she won't drown her sorrows at McDonald's.