You would think Jon Voight would have learned by now that trying to make headlines to see his daughter is not the right way to attempt a reconciliation. He has gone to the press before saying he hopes to meet his grandchildren but since he has no way to reach Jolie and she is not interested, he keeps talking about it in interviews. 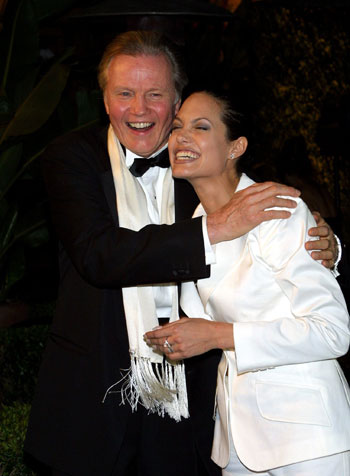 Reports say she is still angry at him for cheating on her mom but I remember at one point she was mad since he called her crazy (in a manic sort of way). Saying she needed serious help. He also spoke about her private life which made it worse. This all went down around the time she adopted Maddox. She has said, "I don't hate him. I simply feel we only have so much energy in this life." Since Angelina has softened up since becoming a mom I would not be surprised if Jon does get his wish to meet his growing family. Supposedly Brad helped Jen reconcile with her mom so maybe he'll help Angelina do the same with her father.