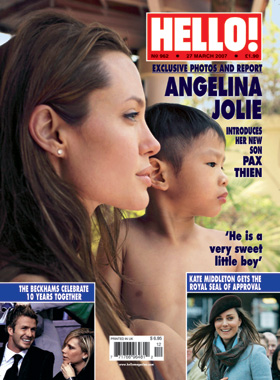 Wow, um, that was quick -- less than a week after Pax Thien's adoption into the Jolie-Pitt family, we have our first official magazine cover of mother and child. Although I honestly didn't think photos would come this quickly, I'm trying to be understanding of Angelina's intentions (selling -- presumably to charity -- the pictures so people don't harass the family for them as much) in doing this. Rumor has it that People/Hello paid in the $2 million ballpark for the photoshoot of Angelina, Pax, Maddox and Zahara. Brad and Shiloh remained at home while the pictures were taken in Vietnam. We will have more from the interview shortly, but in the meantime Angie describes her new son as a "very sweet little boy." Well, he is certainly cute!

We hate to have disclaimers every Jolie-Pitt post, but please try not to attack each other in the comments. Thanks, guys!