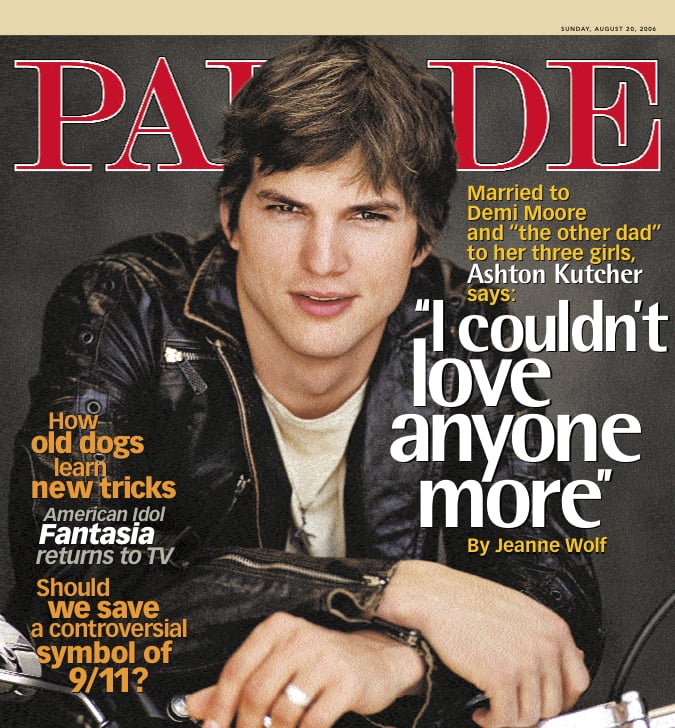 Ashton rarely talks about his new life since getting married, so we were happy to read this interview in Parade. In it he talks about his relationship with Demi, being teammates with Bruce, loving his 3 daughters more than anything and just being a farm boy from Iowa. Ashton sounds like such a grown up, mature dad. It reminds me of Ben Affleck gushing about being a family man. Fatherhood is really changing Hollywood's pretty party boys. Here's more: 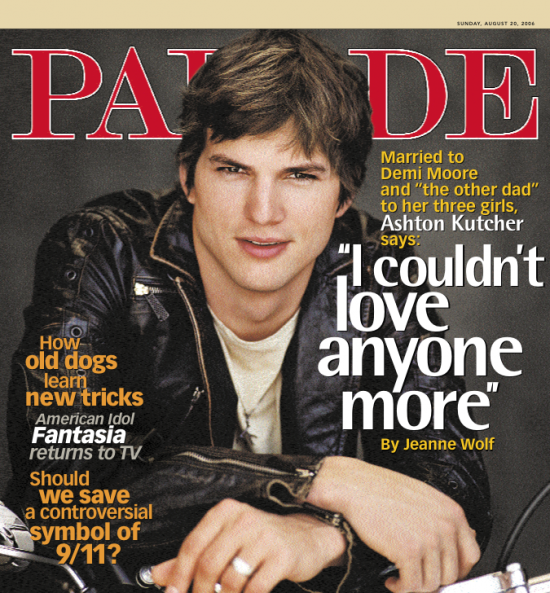 “I’m having a conversation with you because I like you and I trust you,” Ashton Kutcher, 28, tells PARADE Contributor Jeanne Wolf for this Sunday’s issue. “But my relationship is not for sale. My family is not available to sell tickets or magazines.”

Kutcher is careful not to “encourage the unfair and abusive aspect of the curiosity about us,” he says. Still, he beams about his new role as ‘the other dad’ to wife Demi Moore’s three daughters. “There is not a human being that I could love more than those girls and their mom. If I had a daughter that was of my blood, I wouldn’t love that child any more. I feel like I have three kids and we’ll see whether we’re given another child.”

Kutcher, who calls himself “a farm boy from Iowa,” grew up poor. “I’m still a penny pincher,” he says. “I went out and got a Vespa because I can drive all week in L.A. on $6 of gas.”

When Kutcher began dating actress Demi Moore, he says he felt an immediate connection. “I could be totally comfortable on my first date with Demi. It was just there,” he says. “We had one argument in the first three months of dating, and since then we haven’t had any. We deal with issues before they become arguments. I’ve never tried to change my wife, and
she has never tried to change me. Demi told me once, ‘When you’re right, that’s all you get to be.’ And for some reason, that made sense to me.”

And how has walking down the aisle affected their relationship? “We waited to get married until we felt like we were already married. It does bad things when you turn the other person into the ball and chain in your life,” he says. “My relationship with my wife has the same energy as before but more depth.”

On his relationship with Bruce Willis, Kutcher tells Parade: “We are teammates. I hope the effort that Bruce, Demi and I put into our relationship helps other divorced people who are having a hard time. In order for it all to work I have to have a good relationship with Bruce. He’s not ‘the other guy.’ He’s not in competition. We have our own friendship. I’m not saying it’s not hard, man.”