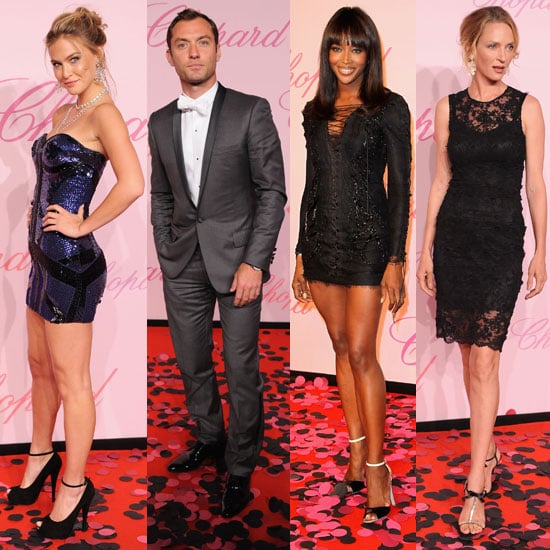 Bar Refaeli went short and sweet in a sequined Roberto Cavalli mini last night to attend Chopard's Happy Diamonds Are a Girl's Best Friend party in Cannes. She jetted to France after spending much of last week in Germany, where she did press for her upcoming campaign with Escada. Her ex Leonardo DiCaprio has also been near the film festival, reconnecting with friends and listening to a Kanye West performance over the weekend at a private production company's concert. Leonardo DiCaprio and Blake Lively are also the subject of some recent romance rumors, after being linked last year while she auditioned, unsuccessfully, for a role in The Great Gatsby remake. Leo wasn't spotted at the bash yesterday, but Bar had the company of jurors Jude Law and a Dolce & Gabanna-clad Uma Thurman. Naomi Campbell also stepped out for the event following a cameo at the Fashion For Relief Japan Fundraiser.

Celebrity Families
Gabrielle Union on Zaya Coming Out as Trans: "It Was Just a Beautiful, Full-Circle Moment"
by Murphy Moroney 1 week ago

Jude Law
Jude Law Is a New Dad to Baby Number 6! Get to Know the Actors Kids
by Hedy Phillips 2 weeks ago