The war has just begun. It turns out Star did surprise her co-stars by announcing her departure this morning. Why was Babs shocked? Well, apparently Star was supposed to announce it on Thursday but went ahead and did it anyway. On top of that, Barbara was pissed off about the People story where Star said she felt like she was fired. She said she felt betrayed. SO what now? Apparently Barbra Walters is telling Star to not come back to The View - EVER. I am so looking forward to seeing the show tomorrow. 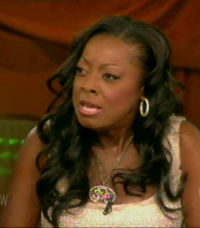