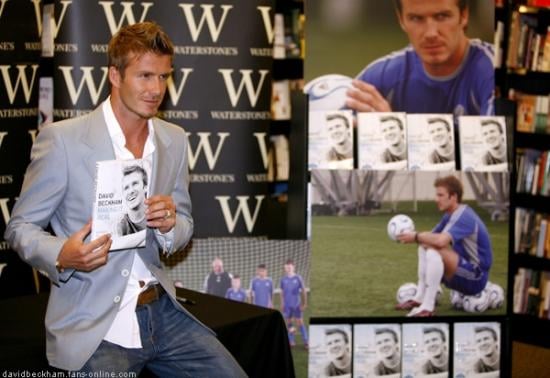 David Beckham is promoting his new book called Making It Real - My Soccer Skills Book. The Mirror has exclusive interviews this week while he promotes his new title. Who knew we would fall more in love with the soccer superstar? Poor David has had a rough year after being let go from his England team but it looks like Vic has helped him through the tough times. Check out all the wonderful things he has to say about his wife. Here's more: "Victoria was amazing after the World Cup," David said. "The support she showed me was incredible. People sometimes seem to talk about her as a bad influence on my career but they wouldn't if they could see how much she helps me.

"Like I said, she's been my rock. Before the World Cup, she did everything to make sure I was focused on football and nothing else. She knew how important it was that absolutely nothing got in the way of the build-up to the tournament. After the World Cup, she was the one who was there for me - with my mum and my dad and the boys.

AND David revealed that he feels immensely proud of Victoria. "It's not difficult to see pictures of Victoria in the newspapers every day," he said. "She's there because people like taking pictures of her because they think she's beautiful. And I think she's beautiful, of course. It's flattering that people want to know what she's doing next, what her hairstyle is, what sunglasses she's going to be wearing, what her jeans are like.

"What is difficult is when people criticise her. She's a devoted wife and mother and she deserves every success she gets. What happened to me with being dropped from the England squad is the kind of thing that can knock your self-esteem.

"It did affect me deeply for a couple of weeks but when I've got a wife like Victoria, a happy family and good friends, it helps you put things in perspective."

Isn't it just so sweet. Victoria sure is one lucky lady. Lots more pics of Beckham so read more

Previous Next Start Slideshow
Victoria BeckhamDavid Beckham
Around The Web