The star-studded cast of He's Just Not That Into You gathered on the red carpet in LA last night for the premiere of their movie. All the girls looked fab including Drew Barrymore — who toned down her blond 'do she loves so much — Scarlett Johansson, and Ginnifer Goodwin. Jennifer Aniston stole the show after catching Sunday's big game with tweeting John Mayer. Ben Affleck brought his scruff along with all the boys. Drew chatted with us about her desired fourth Charlie's Angel, Greg Behrendt chatted about his dating advice,> and Ginnifer also chimed in about technology and dating. The charming Big Love actress also talked about an endearing recent He's Just Not That Into You moment in her own dating life: 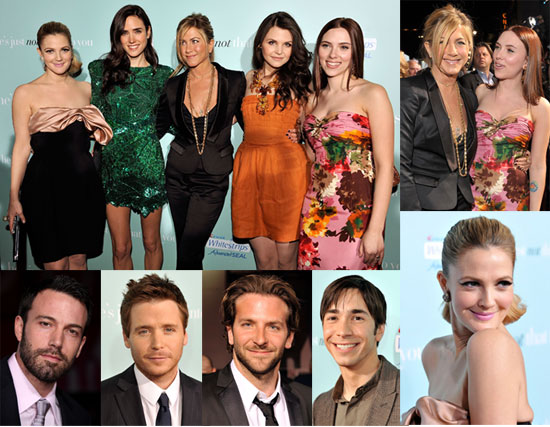 Yes, we’ve all had that moment, I hope, because not everyone can like everyone and please, let’s not waste all this time making excuses. But I was the other day hanging out with Justin Long and I was telling him that this guy had been texting and all of a sudden he wasn’t texting and I absolutely convinced myself that my Blackberry was purposefully ignoring this one guy’s texts or maybe mine weren’t getting through to him. Of course, no one else in my life was complaining about the inability to communicate with me, and I was telling my mother about this and my mom said "Well you should call him and you should say that your Blackberry might not be working" and I’m going "Mom, that’s the dumbest thing I’ve ever heard." And I’m saying this to Justin Long and someone walks by our table and says "Are you guys acting out scenes from your movie?" And in that moment I was like, Oh right, he’s just not that into me.

Famous actresses really are just like us sometimes, especially when it comes to heartbreak. It's hard to believe anyone would not be that into any of the women — or men — in this movie, but we all need a good friend to talk us through any rough spots. At least the movie, which opens on Friday, gives it out with a laugh.

To see more from the premiere including Jenna Fischer, Ben, Drew, Ginnifer, Jennifer, and others just read more.

Celebrity Families
Mark Our Words: Paul Bettany and Jennifer Connelly's Kids Will Be Superstars
by Emily Weaver 19 hours ago