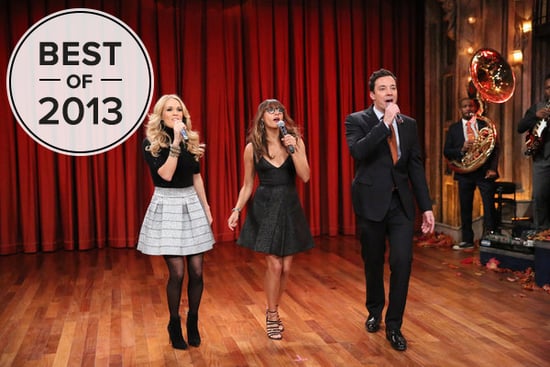 The year's most memorable late-night TV moments became a battle of the Jimmys, with Jimmy Fallon and Jimmy Kimmel bringing viral videos to the Internet week after week. With "Timberlake Tuesdays," Jimmy Fallon had fans tuning in to see his hilarious skits with pal Justin Timberlake, including the latest edition of their hit sketch "History of Rap." Fallon also let other stars show off their musical talents, like with John Krasinski and Joseph Gordon-Levitt taking the mic for epic lip-synch battles. Meanwhile, Jimmy Kimmel proved he's the master of pranks and parodies, giving us a crazy twerk fail and a "Blurred Lines" spoof to remember. Have a laugh with 2013's best moments from the late-night Jimmys.

Ahead of Easter, Nick Offerman and Blake Shelton clucked their way through "Ho Hey" as the Chickeneers.

John Krasinski brought down the house with his lip-synch skills.

Keep reading for more of the year's best late-night videos.

Game of Thrones came to late night with Fallon's "Game of Desks" spoof.

Brad Pitt did a "double yodel" with Fallon from the rooftops of NYC.

Ryan Reynolds proved that water fights can actually be hot.

Full House fans went wild when Jesse and the Rippers reunited for a performance.

Justin Timberlake brought his moves to the stage with "Evolution of End-Zone Dancing."

For "Timberlake Tuesdays," Justin also joined Fallon for another edition of the history of rap.

Miley Cyrus joined The Roots for a Brady Bunch-style take on her song "We Can't Stop."

Fallon wondered: What does the fox say?

Fallon brought on friends Rashida Jones and Carrie Underwood for a hilarious spin on holiday music.

Ryan Gosling teamed up with Will Ferrell as the "Knife Guys."

Matt Damon took over as the host of "Jimmy Kimmel Sucks."

Channing Tatum debuted "(I Wanna) Channing All Over Your Tatum."

Amid so many "Blurred Lines" parodies, Kimmel's definitely stood out.

Kimmel revealed that the "twerk fail" video was actually a hoax.

Kanye West stopped by to settle the pair's Twitter feud on air.

Kimmel brought holiday pranks to a whole new level when he took over John Krasinski's house.

Black-ish
The Black-ish Kids Have Grown Up, and We Have the Pics to Prove It
by Kennedy Hill 2 hours ago

by Kara Kia 28 minutes ago