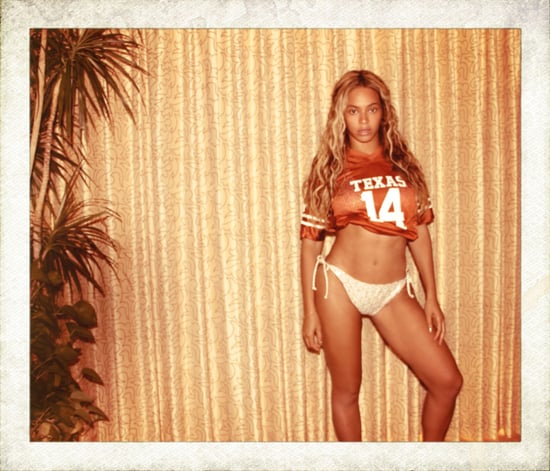 In the midst of record low temperatures across the nation, Beyoncé Knowles may have been feeling a bit nostalgic for Summer. The songstress shared a few sexy photos on her personal blog on Tuesday, showing off her body in printed bikini bottoms while also repping the University of Texas Longhorns and quarterback David Ash. The photos were likely snapped during Beyoncé's vacation in Miami back in July — she sported the same ensemble while hanging with daughter Blue Carter by the pool.

Even though it's been ridiculously cold recently, Beyoncé is still finding ways to flaunt her enviable figure in two-pieces while on tropical trips. Just last week, she posted a series of snaps from a getaway in Jamaica with her sister, Solange, and husband, Jay Z. The musical power couple made even more news when Jay announced that he and Beyoncé would be embarking on the "spiritual and physical challenge" of going vegan for 22 days. While Bey may already be missing the meat and cheese (as evidenced by her recent food-inspired fashions), she has been sharing photos of her yummy-looking meat-free meals on Instagram.

Beyoncé Knowles
Beyoncé Calls For an End to SARS and Its "Senseless Brutality" in Nigeria: "I Am Heartbroken"
by Grayson Gilcrease 2 days ago