Jessica kicked off 2009 with a pair of questionable jeans that brought up a serious debate over her weight. Ashlee spoke up defending her sister, and even the President added his two cents on the issue. Jessica kept her chin high, performing in her famous daisy dukes, even if she sometimes forgot the words to her songs. By mid-February things were looking up for Jess as she and Tony Romo spent Valentine's Day together in NYC before a romantic getaway in March. The weight debate was put to rest for a bit as Jess showed off her bikini body while vacationing in Mexico. The Vanity Fair cover girl decided to put her experience of being under the microscope to good use and signed on to host a new show inspired by her experience called The Price of Beauty.

Jessica spent Fourth of July weekend singing the national anthem at a golf tournament where Tony played. The good times came to an end mid-July as news broke of Jessica's split with Tony right before her 29th birthday. Simpson returned to a familiar post-breakup routine, hitting the gym daily as everyone speculated about her broken heart. Jessica also weathered the release of her Glamour magazine cover — written before the breakup — in which she spoke openly about their relationship but acknowledged it might not last forever. Jess was soon off on trips to Japan and Paris for her show. On her return from a trip to Brazil, tragedy struck when Jessica's beloved dog Daisy was snatched up by a coyote as she watched in horror. The search for Daisy continued for days until Jessica began the healing process with a trip to Paris for Fashion Week with Ken Paves. 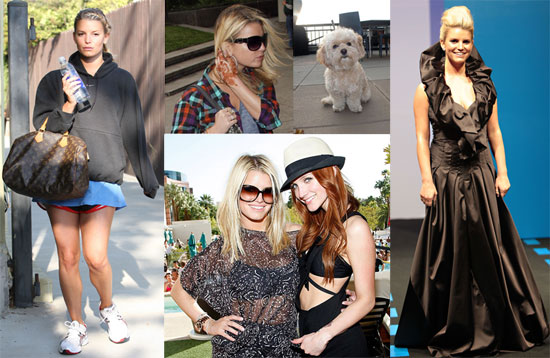 Jess seemed to be in better spirits as time moved forward and she headed to Vegas for Ashlee's 25th birthday party in mid-October. Jessica's global tour wasn't over yet: she headed to Morocco and India before landing back in the States to celebrate Bronx's first birthday and Ashlee's Broadway debut. Through it all, Jessica has kept her head held high and that famous smile bright — we wish all the best for Jessica in 2010!