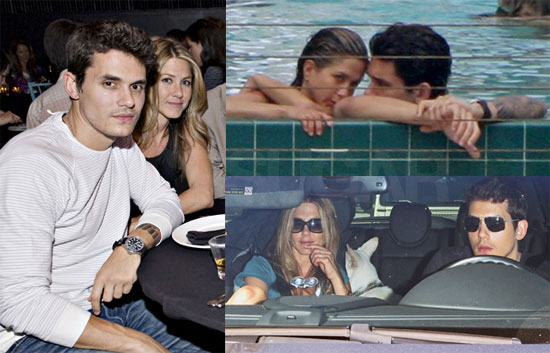 Early this year rumors started that Jennifer Aniston and John Mayer were an item, but it wasn't until the first hot bikini photos with poolside drinks that they became one of the most buzzworthy relationships of 2008. John was first caught cuddling up to Jen in Miami in late April, and most of you pronounced them to be a sexy new couple. John paid a few more visits to Jen and the pool while she was in Florida shooting Marley & Me, which then turned into romantic dates in NYC and partying with Jen's BFFs in LA.

The vacation-loving couple soaked up the sun in Mexico before heading to Europe, where Jen listened in on a few of John's shows. Most of you didn't think they would last and by August word had spread that their fling had fizzled.

Jen quietly recovered with shopping, friend dates, and showing off her hot bod, while John took it upon himself to talk to the paparazzi about the breakup.
After a month of going their separate ways, rumors of a reunion started to heat up again.

By John's birthday in October they were already back in full force and celebrating together, though John had to promise Jen that he wouldn't blab to photographers about their relationship anymore. It's been smooth sailing since then, complete with pregnancy rumors, celebrating Obama and new celebrity friends. Jen even confirmed their relationship on Oprah, and these days their biggest problem seems to be giving each other proper credit for their baked goods. Sounds like 2009 will be kicking off on a happy note for the twosome, and we can't wait to see what kinds of twists and turns their relationship will take next year.