Here we go again.... have Brad and Angelina changed their ideas about marriage? The couple has gone on record saying that they aren't going to get married until everyone in the country can. Well, gay marriage may not be legal yet but rumor has it Brad and Angelina are getting married anyway. According to reports, they are planning a Christmas wedding in a small village outside Johannesburg. Here's more: 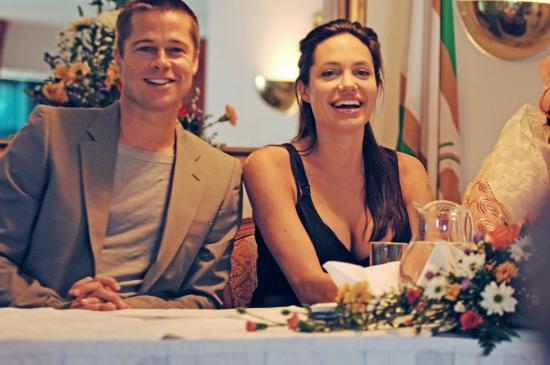 Brad Pitt and Angelina Jolie are planning a fairytale Christmas wedding in South Africa. The Hollywood couple will tie the knot in a small village outside Johannesburg, according to reports in the US. Sources say they were persuaded to pick the venue after talking to chat show queen Oprah Winfrey.

An insider said: "They are treating their marriage like a spiritual affirmation and don't need big Hollywood glitz like Tom Cruise had in Italy." The ceremony will include traditional African music and will be "simple and elegant", a friend of the couple told US magazine OK!

It comes after Jolie and Winfrey have grown close after the TV host was impressed by Jolie's humanitarian efforts. She is said to have told her: "When you have the chance to capture lightning in a bottle you need to go for it." The pal said: "Ange is grateful to have a big sister in Oprah, a person who understands her fears of commitment but is also a kindred spirit."

Winfrey, 52, is expected to be among several stars attending the low-key event, shortly before Christmas....Madonna, her husband Guy Ritchie, actor George Clooney and Jolie's co-star Daniel Craig are also said to be going.

We're not sure if we're buying this story. Brad and Angelina have been pretty adamant about not getting married. But they could have had a change of heart. And at least they are inviting Oprah to their wedding after she was snubbed twice by Tom and Katie.