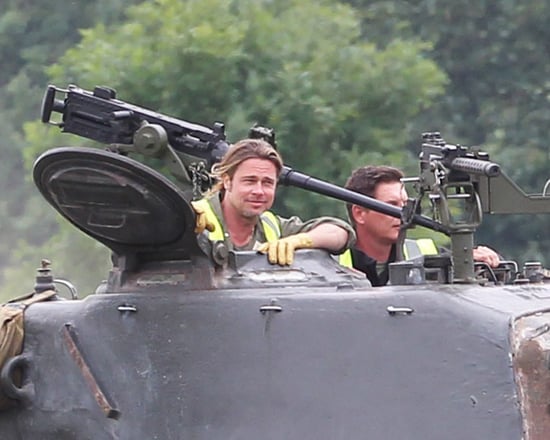 Brad Pitt flexed his fighting muscles while learning how to drive a tank in the English countryside this week. The actor chatted it up with a local instructor and flashed a sexy smile while hanging out on top of the machine. Brad is currently prepping for his upcoming role as an American sergeant in David Ayer's World War II action drama Fury, which also stars Shia LaBeouf and Logan Lerman. The flick reportedly begins filming next month with a release date of November 2014.

Fury is just one of the many projects that Brad has in the pipeline right now. He made a surprise appearance at the Telluride Film Festival over the weekend to screen the powerful period film 12 Years a Slave with costar Michael Fassbender, who also plays alongside him in the upcoming drug drama The Counselor. Both movies come out in October, so we'll likely see lots more of busy Brad as he promotes them later this month.

Disney
Halle Bailey Reflects on Her Little Mermaid Experience as Filming Wraps: "I'm So Grateful"
by Monica Sisavat 2 weeks ago

Nostalgia
Jennifer Aniston Lists Brad Pitt as One of Her Favorite Friends Guest Stars: "[He] Was Wonderful"
by Monica Sisavat 5/25
Harry Styles
We're Not at All Jealous of These Pics of Emma Corrin and Harry Styles Filming My Policeman
by Grayson Gilcrease 5/12