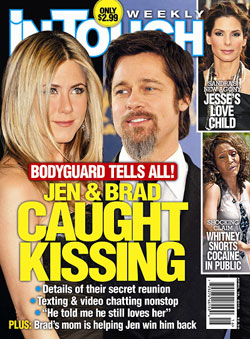 Bodyguards claim to know all the juicy secrets in Hollywood, but iron-clad confidentiality agreements usually keep their stories hidden. Not so for some former employees, who can be more than happy to share details. The latest person to go public is a man named Bill who apparently used to work for Brad Pitt and Angelina Jolie. Bill says that he knows of multiple meetings between Brad and Jennifer Aniston, including one kiss-filled rendezvous last December while he was on paparazzi watch. It's certainly not the first time we've heard stories of Brad and Jennifer reconnecting, and those tales are usually met with some skepticism. With this supposed eyewitness account, we're wondering — do you ever believe stories from former bodyguards?