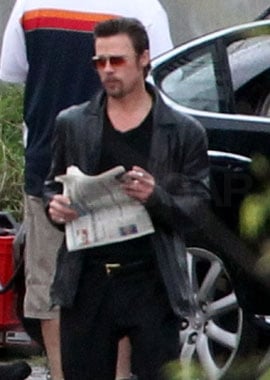 Brad Pitt was back on the New Orleans set of Cogan's Trade this afternoon with his costar Richard Jenkins. He also logged some time before the cameras yesterday, when he debuted his slicked-back hair and goatee combo. Brad's good looks are apparently rivaled by men around the world, and his facial hair has been a focal point before and he, in fact, shaved it for his last role in Moneyball. Angelina Jolie, meanwhile, is apparently letting the Tomb Raider series go on without her and BuzzSugar wants to know who you'd like to see next as Lara Croft. Brad is venturing into some new territory with his look for this movie, though, and we'd like to know what you make of his style. So, tell us — think he's hot stuff or is this not really your thing?