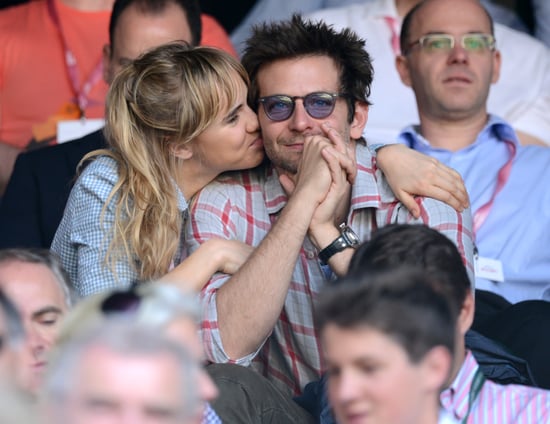 Bradley Cooper got a kiss from his model girlfriend, Suki Waterhouse, in the stands of Wimbledon yesterday. He and Suki popped up in London to watch Andy Murray beat Jerzy Janowicz in one of the championship matches of the tennis competition, which will take Murray on to play the top-ranked Novak Djokovic in the final on Sunday. While Bradley and Suki turned up the heat at center court, they were not the only famous faces in the crowd — see all the stars at Wimbledon.

Bradley joined up with Suki at the historic sporting event in London following a solo appearance in Paris. On Tuesday, he linked up with former First Lady of France Carla Bruni-Sarkozy at Bulgari's The Diva Event, which was part of the high-fashion festivities surrounding Paris Haute Couture.

Schitt's Creek
Sarah Levy Just Got Married, but She's Given Glimpses Into Her Romance For Years
by Yerin Kim 3 days ago