Britney's reps are definitely hard at work earning their money this week (as usual). People just can't stop talking about Ms. Spears. First there were rumors circulating that she's knocked-up again. Manager Larry Rudolph said the rumors are absurd and totally not true. Also the song Fed-Up that supposedly leaked from her new album turns out to be a no go as well. Her rep at Jive Records Gina Orr says, "That is NOT her vocal, that is NOT a song on her forthcoming album." Nice work on whoever produced the track since it was certainly catchy. 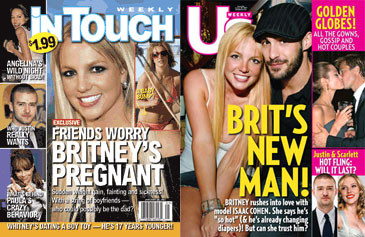 One thing that is for real in Britney news is her new man Isaac Cohen. Friends say that the two have what it takes to make it last. “They love the same things: partying, drinking, watching TV and just going crazy together,” says a Spears insider. "She also likes that he is the strong, silent type." He's also evidently taken to her kids and is willing to change diapers. Sounds fine just as long as they don't drink, party, go crazy and hang with the kids at the same time.