We are still mourning the sad news about Reese and Ryan's split but at the same time we are elated about the Britney news. We love that she filed for divorce leaving K-Fed behind, and now we're hearing that K-Fed was planning to divorce Britney too. Apparently Kevin has been secretly meeting with lawyers since May and was even planning on using Sean P as leverage, but Brit beat him to it. L&S reports: 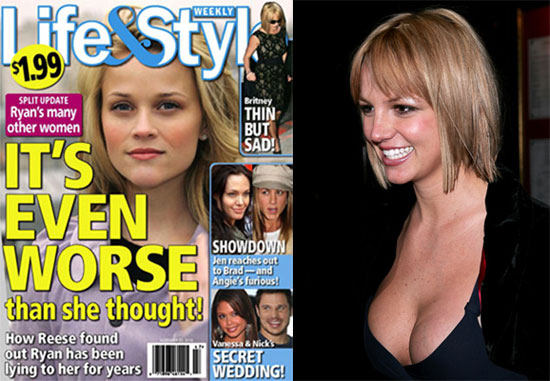 “Kevin is focused on his tour,” says an insider. “I don’t think he was prepared for this.” When contacted by Life & Style, Kevin’s rep seemed to have no idea that Britney had filed divorce papers. In fact, insiders say Kevin was preparing a divorce bombshell of his own.

As early as last May, Kevin, 28, began secretly meeting with his lawyer, Mark Kaplan, to work out a settlement deal with Britney, 24. Kevin was prepared to use their son, Sean Preston, now 1, as leverage: If Britney didn’t give Kevin $10 million, plus their $10 million Malibu mansion, he would sue her for custody, claims an insider. “Kevin knows that Sean is Britney’s Achilles’ heel,” an insider says.

But the couple stayed together through the birth of their second son, Jayden James, now 2 months. Yet Life & Style knows that Kevin recently went back to his lawyer for more secret divorce talks — and this time, he had two babies to use as pawns. He was hoping to score a $30 million payday.

“He feels like $10 million is not a generous amount if he and Britney split since he won’t have any part of his sons’ lives,” says an insider.

But Britney was too quick for him. While Kevin was caught up with his troubled album-release tour, she filed papers of her own asking for legal and physical custody of Sean and Jayden — before the couple reached any kind of deal.

“There was no way she was going to let Kevin lead the way on this subject,” says a close friend of Kevin’s. “She filed first to save face. It’s all about taking care of the babies and keeping the money.”

And Brit’s prenup should be airtight. According to the prenup, Kevin will receive $300,000, any gifts Britney bought him that cost less than $10,000 and half the value of their $10 million Malibu mansion.

You go girl! Can you imagine if Kevin had slapped the papers on Brit first? And if he was really planning to use Sean P as leverage, he's just a total jerk who deserves to be kicked to the curb. Let the K-Fed backlash begin.

Britney SpearsKevin Federline
Around The Web

Music
Cardi B Is a Fan of This Mashup of "WAP" and Rihanna's "S&M," So You Know It's Good
by Yerin Kim 4 weeks ago