Britney is already making crazy headlines in the first few hours of the new year. We were hoping Ms Brit would kick things off in the right direction after a disappointing end of 2006 but it doesn't look that way. Britney hosted a NYE party at PURE last night in Las Vegas and now there are reports that the champagne drinking pop star collapsed at 12:50 am. Robin Leach reports: 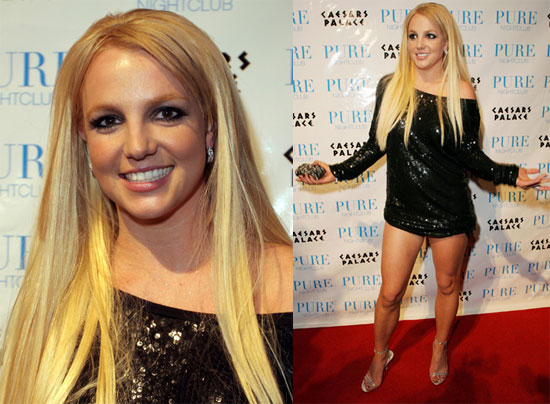 Mystery now surrounds Britney's collapse early this morning. She had been seated on a VIP tented-cabana bed overlooking the dance floor at 12:50AM talking with one of her male dancers. She intimated she wanted to leave and as she stood up, "she went into a dead faint and just fell right to the floor."

Her group pulled her up and lay her on the bed at the same time as her personal security asked for the club to provide at least 10 other security managers to "get her out as quickly as possible." They surrounded the stricken pop star in an attempt to screen her from all observers and the new years revelers on the crowded dance floor.

One woman in the Spears' entourage yelled, "Make sure nobody gets any photos. No photos anywhere."

When the 12-strong security phalanx was in place, two of her dancers wrapped Britney in what appeared to be a blanket-hooded poncho. Literally carrying her in both arms, they managed to propell her through the crowds and out of the club.

It appeared as if "she was being dragged as she wasn't walking under her own speed" said one eyewitness. "It looked as if they wanted to get her up to her hotel room as soon as possible."

At 2AM this morning, an ambulance was summoned to the hotel but it was totally unclear if it was brought to Caesars for Britney.

Let's hope the ambulance has nothing to do with Britney. Let's also hope if she did collapse, then she will see this is an eye opening experience to slow down and make some new year's resolutions to rest up and get strong. Britney we really predict that this could be a huge comeback year for you so stop screwing it up. We can only cheer for you for so long.