Finally, some pics of a sober looking Britney not holding a drink. Hopefully, this is the first of many. While Britney looks to be turning over a new leaf; unfortunately, she is paying for her NYE fiasco. The people at PURE are evidently thinking about retracting her fee after she passed out/fell asleep while hosting there on New Year's. Here's more: 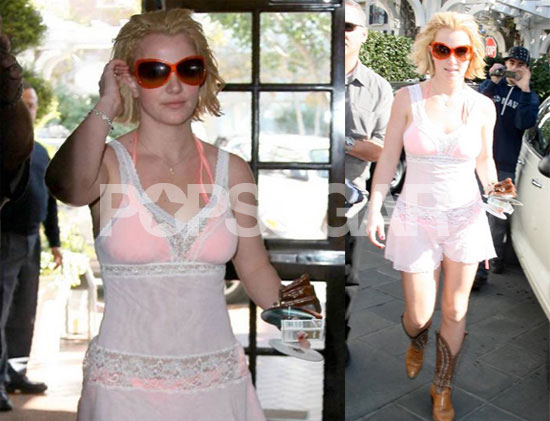 Sources say Pure nightclub in Las Vegas wants to nix her almost half-million dollar appearance fee, after she violated the contract. "Britney failed to spend the agreed amount of time in the club, because she had to be helped out after collapsing," alleges a close source.

The tipster also says the club is "furious" with her because of her PR spin that she merely fell asleep — implying the place is boring.

Britney's rep dismissed the story. A club mouthpiece insisted her remuneration was "less than half" of $400,000 and that she wasn't penalized for leaving early. "Britney had a great time," said the spokeswoman. "We love her and can't wait for her to come back."

But an insider familiar with the club says: "The moment a celebrity gets into one of those deals they are on the clock. They are watched to the minute, and they are not allowed to leave early. It's a contractual obligation."

Things aren't all bad for Britney. X17 caught up with her listening to a song from her new album and from what we could hear of it, it sounds pretty good. Maybe the rumors of her album being put on hold because it's so bad are just that - rumors.

by Tori Crowther 55 minutes ago