Lately we've all been wondering just what Britney is thinking. She's been acting out of control, drinking, smoking, and literally running around half-naked. After she apologized for her behavior on her website, we thought the old Britney could be back. But, apparently she is still spiraling downward, and she doesn't seem to care. Check out the latest pics of Britney leaving Dolce after dinner last night. Apparently, she also hit Les Deux and stayed out until 2:30 AM. However, her manager Larry Rudolph, says she is not as oblivious as she appears. Here's highlights: 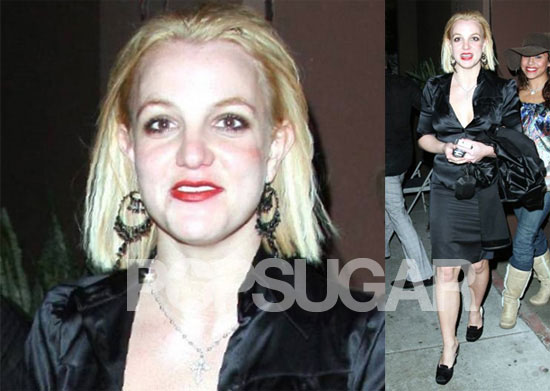 Hopefully, Britney can win us all back since we are starting to seriously lose faith in the Britney brand. She has definitely hit an all time low with her look last night. At least she ditched the extensions.