Britney's laid low (well, other than that one thing) since her Sunday night VMA performance, but that certainly doesn't mean the rumors have been quiet around her. In fact, as Simon Cowell pointed out, the world is talking about her more than ever (not to mention that she certainly stole the VMA show). Simon's not the only celebrity coming to Brit's defense, Fergie let out an impassioned plea for people to give Spears a break. 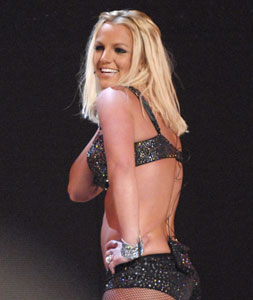 To the public, there are a million reasons to criticize Britney but for MTV it's only been gold - the VMAs ratings were up 23% from last year!

Oh - and the newest detail about her VMA look, Ken Paves flew to Vegas to do her hair, but "made the professional decision" not to. To be fair, her hair has looked way worse but she still could have used the help.

Elsewhere in Britney, the record label is trying to overshadow her performance with more buzz about her album. Both People and EW came out with sneak previews on more new tracks and lyrics from her album. As great as it is to hear hot new lyrics about her "bad media karma" and being "Mrs. American Dream", there is still no word on whether the music is any good.

On an entirely different Brit note, she sold her temporary Beverly Hills house that she never really lived in and is back in Malibu. I'm sure Sean Preston, who turns 2 this week as JJ turns 1, is loving it. Just a thought that I'm sure she's heard before - maybe getting out of LA entirely would be best.

Megan Fox
Oh Baby, Baby — Megan Fox's Britney Spears Impression Is Taking Us Back to 1998
by Victoria Messina 6 days ago