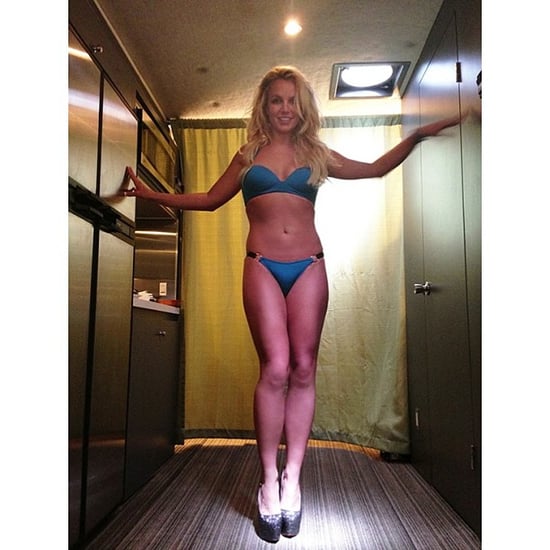 Britney Spears took to Instagram on Sunday to share a sexy snap of herself in a blue bikini with the caption, "Gonna get my tan on in the desert in between shots on the #WorkBitch set today. It's HOT out here people!!!! #desert #heatwave #WorkBitchDay2." Britney is currently shooting the music video for her upcoming single "Work Bitch" and has been dropping hints about the song and the clip via social media all week. She tweeted a photo from the set on Saturday (see below) and told fans that she "danced her ass off" during the filming. Britney's new single is reportedly part of the big announcement she'll be making on Sept. 17, which is also the day she is set to perform on Good Morning America. For the past few weeks, Britney's official website has featured a countdown with the message, "All eyes on me," which has fans speculating that the big secret could have to do with a new album and her upcoming residency in Las Vegas.

Summer Fashion
These 19 Curve Swim Brands Have the Chicest, Well-Made Suits
by Sarah Wasilak 4 days ago