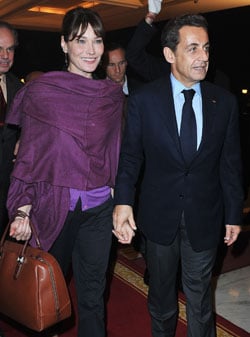 Carla Bruni gave birth to a baby girl in Paris today. The child is Carla's first with her husband, French President Nicolas Sarkozy, though both have children from previous relationships. Carla has one son, Aurelien, who is 10, while Nicolas is also father to 26-year-old Pierre, 25-year-old Jean, and 14-year-old Louis. Carla and Nicolas have not released a name and apparently don't plan to share an official photo of their daughter either.

We saw pregnant Carla in a bikini over the Summer just a few days before the couple confirmed the pregnancy in July. Congrats on their new addition!

Billy Porter
Billy Porter and Adam Porter-Smith Have Opposing Zodiac Signs — Are They Compatible?
by Adrianna Adame 16 hours ago

Ciara
Ciara Serenading Russell Wilson For His 33rd Birthday Is the Sweetest Thing!
by Princess Gabbara 16 hours ago

Celebrity Couples
Is Giveon Single? Here's the Status of the "Heartbreak Anniversary" Singer's Dating Life
by Alicia Geigel 17 hours ago

by Princess Gabbara 12 minutes ago