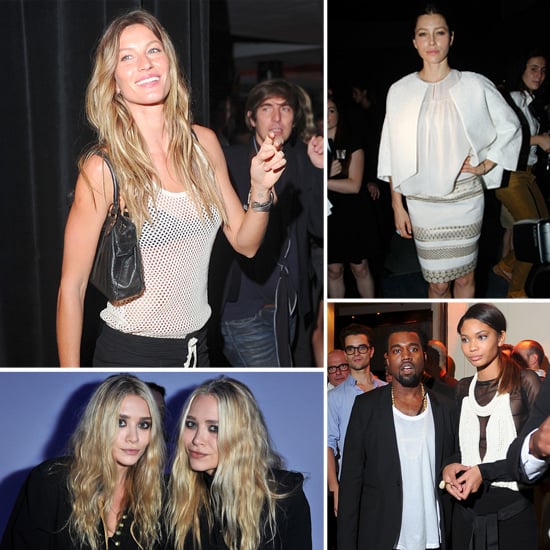 Paris Fashion Week was in high gear all weekend long, with several celebs taking in — and showing — collections in France. On Friday, Rachel Zoe and Rodger Berman took a stroll with baby Skyler before she headed to the Jean Paul Gaultier show. Rachel was also on hand on Saturday for Kanye West's fashion-design debut, as were Mary-Kate and Ashley Olsen and Vogue editor Anna Wintour. Kanye's first attempt at a clothing collection was met with mostly lackluster reviews, unlike the Givenchy show the following day, which was a hit among the fashion set. The Givenchy show, which featured top models including Gisele Bundchen, drew Jennifer Hudson, Rachel, Kanye and his rumored new girlfriend Chanel Iman, Liv Tyler, and many other stylish stars.

Jessica Biel went ladylike for the Giambattista Valli show, where she joined Lea Michele, and Salma Hayek with her husband Francois-Henri Pinault. Miranda Kerr also showed off her street style between gigs on the runway at Gaultier, Dior, and Balenciaga. The fashionable festivities continued today, with Paul McCartney and his fiancée seated in the front row for his daughter Stella McCartney's runway presentation. They joined Salma and Francois-Henri, as well as Rachel and Rodger, to take in her Spring 2012 collection. Click through our gallery to see all of these celebs, and even more, in our roundup of Paris Fashion Week's recent days!

Fashion Video
Tanya Taylor Made a Fashion Week Video With Her Loyal Celebrity Clients, Reminding Us to Vote
by Sarah Wasilak 4 days ago

Coco Rocha
Christian Siriano Hosted a NYFW Runway Show at His House, and Coco Rocha Jumped in the Pool
by Nikita Charuza 4 days ago

Fashion Designers
What Does a Socially Distanced Runway Show Look Like in 2020? Let Us Show You
by Sarah Wasilak 4 days ago