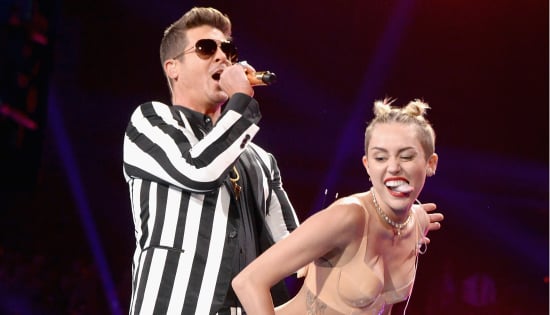 MTV's annual VMAs always make for a memorable evening, and this year was no different. There were too many provoking moments to count from last night's show, but it seems that the whole world took to their social media accounts to give their two cents about the craziest moments — and that includes celebrities, some of whom were there to witness the debauchery firsthand. From Miley's raunchy rendition of "We Can't Stop" featuring Robin Thicke to Justin Timberlake's awe-inspiring performance, see what got the stars talking from the 2013 VMAs.

Justin Timberlake, congratulations!!! And what a tremendous performance!!!!

Leaving the VMAs. No it's not over. I'm no psychic but congrats @onedirection #songofthesummer

I love you guys so much.

All of @jtimberlake female dancers look like all his ex's! Was this on purpose?

That is correct. RT @dope_cinema: only @LadyGaga would purposely put booing in her performance hahah

Remind me to never let my kids into showbiz... Thanks

Mileys getting out- twerked by pro dancers right now. #unfortch

Taylor swift has the longest legs ever. Those aren't her boobs in that dress, those are her knees

It's nice that Miley is comfortable with herself.

VMAs: Stop all this "what's up Brooklyn!!!" What's up is I'm 10 blocks away in my nightgown trying to keep my dog from drinking his own piss

Kanye is practicing his ' dont ask me about kim or the baby' face backstage. #vmas

JT is a cutie.

Miley, step away from the foam finger and put your tongue away...PLEASE. #VMAs I'm so confused. #OldFogeyTweet

Miley's tongue must get so dry.

Rihanna
Rihanna's Badass Suit Reminds Us Tie-Dye Is Here to Stay, and It's Not Just Limited to Sweats
by Yerin Kim 1 day ago

Miley Cyrus
Miley Cyrus Is Making a Metallica Cover Album, and We're Ready For Her Version of Heavy Metal
by Grayson Gilcrease 1 week ago