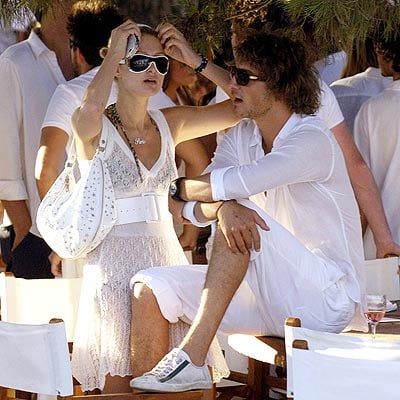 A Celibate Paris Fulfills her Dreams

Paris is so serious about her music career that she is doing a special on MTV on August 8th to give us a sneak peak at her desire to fulfill her dreams. You can click here to listen to a clip of her remake of Rod Stewart's famous, Do You Think I'm Sexy. You can also check out a sneak peak of the MTV show below.

Paris Hilton also wants the world to know she doesn't sleep around and that she is swearing off sex for a year. Wonder if she really will stick to this plan now that she's officially back together with Stavros. Check out her recent comments about sex and Tony Blair below.... "I've only done it with, like, a couple of boyfriends," she tells British GQ. "People think I sleep with everyone, but I'm not like that. I like kissing, but that's all I do. I'm not having sex for a year, I've decided. I'll kiss but nothing else." The hotel heir-head also showed off her knowledge of global issues when asked if she dug British Prime Minister Tony Blair. "Who's Tony Blair?" she mused. "Oh, yeah . . . he's like your president? I don't know what he looks like."

More pictures of Paris and Stavros in St. Tropez so read more