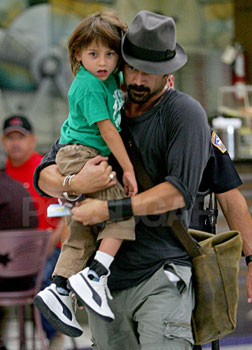 Colin once had a reputation as a partying bad boy, but now this sobered up lad has shown his sweet side. Last month we heard how generous Colin is when he took a homeless man on a shopping spree, and now he is talking for the first time about his 4-year-old son James, revealing that he was born with a rare form of cerebral palsy called Angelman Syndrome. Colin shows what a doting dad he is and how much he adores his son just the way he is. He said,

”With my son the only time I'm reminded that there is something different about him – that he has some deviation of what is perceived to be normal – is when I see him with other four-year-olds. Then I go “oh yeah” and it comes back to me. But from day one I felt that he's the way he's meant to be.... He took his first steps about six weeks ago and it was four years in the making. All the work is his, he worked his arse off for four years.”

Alex Rodriguez
Alex Rodriguez Is Officially a Dad to 2 Teenagers Now That Ella Is 13!
by Alessia Santoro 14 hours ago

Karlie Kloss
Karlie Kloss Shared a Glimpse of Her Newborn Baby Boy, and His Name Is Adorable!
by Chanel Vargas 6 days ago

Bindi Irwin
Send Tissues! This Exclusive Look at Bindi Irwin's Baby Shower Has Us in Tears
by Maggie Panos 6 days ago