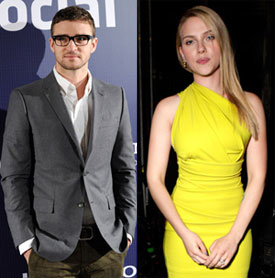 Scarlett Johansson is back on the market following her split from Ryan Reynolds, and while she was reportedly seen bonding with Kevin Connolly, there are rumors that she may be getting support from Justin Timberlake. JT and Scarlett dated in 2007 before she married Ryan and he started seeing Jessica Biel, and they also made a steamy on-screen pair in his video for "What Goes Around Comes Around." Justin is still apparently dating Jessica, so his relationship with Scarlett is likely just friendly. However, if they were both single in the near future — would you be happy if Scarlett rebounded with JT?