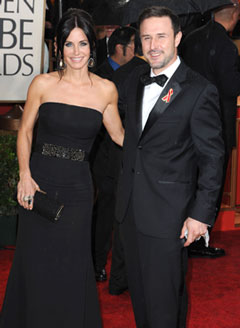 Courteney Cox and her estranged husband David Arquette are spending lots of time together as they kick off promotion for their new movie Scream 4. In interviews this week, Courteney spoke about the experience of working with David and commented that after he left rehab it's the, "best he's ever looked! He's so cute that I'm like, dude, I don't understand. Really?! Why are you that cute right now?" He's made it clear that he wants their marriage to work out, and we're hoping that they both are able to figure out what's best for them as they enter their sixth month of separation. Both Courteney and David have spoken publicly about their split in the past, and we'd like to know what you think of her latest kind words about him — think they're a hint of a reunion?

Courteney Cox
Courteney Cox Covered the Friends Theme Song on the Piano, and Man, I Miss This Show
by Yerin Kim 1 week ago