Here's the latest on Mel and Haley who were both busted for drunk driving. Shows how old Hollywood status reigns over the former child stars. Haley was charged on 4 accounts while Mel plead no contest to DUI and has made an agreement which includes a lot of AA meetings. TMZ reports: 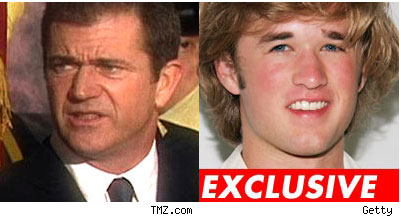 Gibson has agreed to three years probation, but will avoid jail time. Gibson was ordered to attend one year of AA meetings. For the first four-and-a-half months he must attend five times a week. For the remainder of the time, he must attend three times a week. Gibson must also pay $1200 in fines and penalties as well as one hundred dollars in restitution.

And here's the latest on Haley Joel Osment. TMZ reports:

At 3:20PM EST today, Haley Joel Osment was charged with four criminal counts:
Driving under the influence of alcohol
Driving with a .08 blood alcohol level or higher
Enhancement of driving with a .15 or higher
Possession of marijuana while driving