David Beckham and Brooklyn touched down at Heathrow Airport today coming from their family vacation in the South of France. The father and son headed to Wimbledon, where they watched Britain's own Andy Murray take on Rafael Nadal. Murray ended up losing the match, despite an encouraging text from the soccer star, which wasn't the only hard tournament elimination for Beckham this week after the World Cup. The boys just missed Victoria's quick trip to London yesterday, when she attended a bash for Range Rover to celebrate her new gig as the creative design director for the automaker. Last night she flew back to Nice to reunite with Cruz and Romeo while David had special time with their oldest. 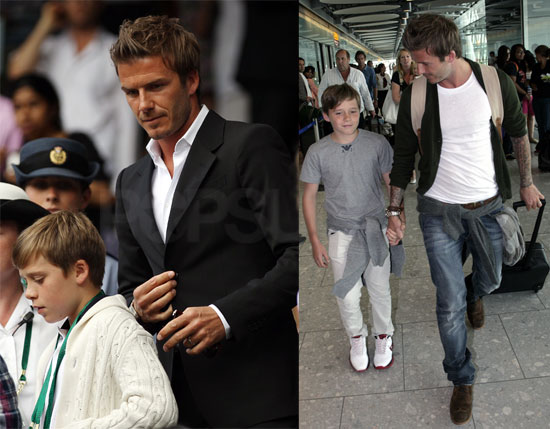 To see more of David and Brooklyn, just read more.

Nick Cannon
Nick Cannon's Youngest Son, Zen, Has Died From a Brain Tumor: "He Was Always Smiling"
by Chanel Vargas 1 hour ago