Dina Lohan claims to have an Apprentice-like talk show in the works. Of course no networks have picked up her show yet but she is still working it. Apparently all of LLs friends call her "The White Oprah" since all the kids come to her for advice. Now that's a scary thought. Here's more from Star: 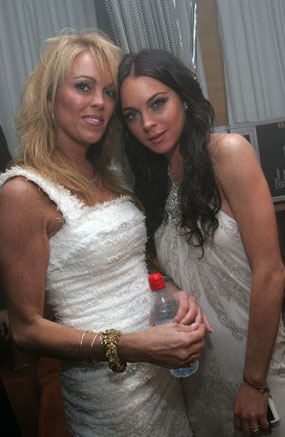 “I have a talk show in the works,” ravishing Dina told Star ‘s David Caplan during an interview at NYC’s Tainted Blue recording studios, where daughter Ali, 12, was recording tracks to her holiday-themed album Lohan Holiday, to be released by YMC Records on Oct. 10. “It’s more of an Apprentice-y, game show-y thing. I would host it and co-produce it. It’s a good heartwarming show. It’s nothing trashy. We’re not going to follow dates to bars and see what happens, or anything like that. But it’s a girl-empowered, woman show. I would only do something that would help other people, because that’s just who I am and how I was raised.”

But is it a reality show? “I don’t want to say that word, but it is about real people,” Dina says, without explaining much more about the show.

The show, Dina adds, will not be a one-time deal, though: She plans to have it run multiple seasons. Although the show hasn’t been picked up by a network yet, Dina’s ready to kick it into gear when it gets snapped up: “We’re shopping it around to networks now, but we’re ready to go.”

Dina tells Star she has the gift to gab — and daughter Lindsay seconds that — so hosting a TV show is a natural move. “I love to talk,” Dina tells Star. “Lindsay’s friends call me ‘The White Oprah’ because they all come to me with their problem. I’m like the mom of these kids in the business!”