Divergent focuses on a futuristic society that's dark, gritty, and trains teenagers to beat the crap out of each other — all of which made for an intriguing movie set to visit. For starters, the film was actually shot in Chicago, where the bestselling novel is set, putting a stamp of authenticity on the project immediately. Inside the studio, the film's stars — Shailene Woodley and Theo James as leads Tris and Four, as well as Zoë Kravitz, Miles Teller, and many others — were clad in edgy, black street clothes, which reflects the general demeanor of the Dauntless: tough, mysterious, and rough around the edges. When the cameras stopped rolling, however, the cast was impossibly charming and goofy. As I waited with other reporters, Shailene and Theo wrapped a scene and started teasing each other even before we began the interview, with Shailene poking fun at Theo's muscle-baring tank top by announcing "I brought a male stripper with me." 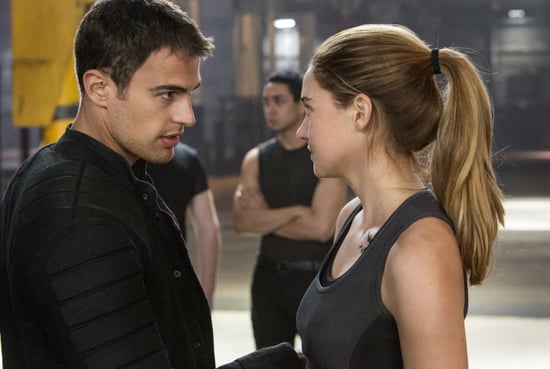 The clear chemistry between Shailene and Theo should put any fears about Theo's casting to rest — especially since, according to them, Four will be a little bit older in the movie than the book. They made light of Theo's age in the interview, but it's clear that Divergent is a project they both take pretty seriously. Read on to see how they compare their onscreen romance to Twilight, their favorite scenes to film, and more.

Are you feeling the pressure of being the next YA heroine?
Shailene Woodley: No, I think if I thought about that I might go insane. It's funny because it is based on a book, but the movie that we're making is quite different from the book in a lot of ways. There seems to be a gap between the two, and it's hard to associate between the fan bases. Everybody is stressing about that and I don't really pay any attention to it; I'm so far removed from that world that I don't think about it.
Theo James: You can't be too influenced by what's going on [with the fans]. You want to be concentrating on the material because that's where the story is coming from, obviously, but you also have to do your own thing, and your own message, and your own interpretation.

Which actor, when you first saw him/her in character, most matched what you imagined when you were reading the book?
TJ: I thought particularly with this [movie], the casting was really good. I know I'm supposed to say that. I think they made a really smart choice with Shai because she's strong, but then there's an emotionality to her, which is really endearing, but not in a weak way, it's in a complex way. And then when I saw Miles [Teller, who plays Peter], I thought he was perfect for it because he's not just a straight bad guy. He has a wryness and a complexity to him that you kind of like him a little bit as well. He's not just this evil foil for making snarky remarks for Shai. He's more of a rounded character than that because he's a good actor, but also because it was good casting. And then Ray [Stevenson, who plays his father] was cool because he's this big dude, and he's kinda dark. He needed to have that kind of hold over Four's character. He needed to be someone formidable in strength.

How is the movie different from the book?
SW: There are some things in the book that, logic-wise, wouldn't make sense in a theatrical way. So we had to switch the way that we were presenting it because logically it just didn't line up.
TJ: There's also some talk about age. The age is unspecified.
SW: Four, in the movie, is 33.
TJ: He's 55. He has a cane. No, he's supposed to be around that age [of 18] but a few years on that. For example, for him to have the experience as a leader and as someone of as high skill as he is, I think it makes a bit more sense if he's been there a bit longer. Only a few more years, but it means that he's had a lot more experience than these Initiates who are coming in.

Do the differences bother you?
SW: It has to be different. I mean, there are some things about the book that I miss. I think their relationship in the book is slightly different. Obviously there's only a certain amount of scenes that we can play in this movie. So we had to pick the most important ones.
TJ: You get less time to establish all the nuances, which you miss.
SW: But it's good, don't worry, it's good.

To see which key scenes you can still expect to see in the movie, just read more.

Is the shirtless tattoo scene there?
TJ: Yes, that scene remains. It's an important scene for us as well because it's a turning point. The great thing about their relationship, at the beginning, is that they're not suddenly in love. Obviously, they kind of are, as soon as they see each other, but they have this fractious thing because he is trying to maintain some kind of authority and she's discovering herself, so they're kind of back and forth. And in the second book that happens as well. They're always kind of together, the love is very forceful but at the same time there are always these other things going on, which I think is much more interesting. But the key scenes they left in, and I think that is a very important one.
SW: It's hugely important. For me, that's what I was attracted to, one of the main aspects of Divergent, is their relationship. It's not one of those teenage dramatic relationships where it's love at first sight and she's swooning over him and he's there with her, and then he withdraws, and she has to chase him. There's no drama. It's very real. It's very personal, and it's very realistic to how a lot of relationships are. It's very different from the Bella/Edward relationship. They're completely on opposite sides of the spectrum.
TJ: The one thing about the character Four that I love, which I think always summarizes it, is when he's on the [Ferris] wheel. Talk about the vulnerability. She says, "What? Are you afraid of heights?" and he says "Yes. I am f*cking afraid of heights." He's at home in his masculinity so that he can be vulnerable.

Did you take anything from the second book, Insurgent, to inform your performances here?
TJ: I did, because you find out about his [Four's] mother. And we were on the tipping point of asking Veronica [Roth] to summarize the third one.
SW: Oh, I begged her.

Did reading the second book change the way you played the character?
TJ: Yeah, I think so. This sounds really pretentious, but the best way to become a character as much as you can is by osmosis as opposed to thinking directly about stuff. The more material that you can have, and understand, the more complex your character and your understanding of the character will be. So yes, it did inform me, but not directly, it just gave him a more rich history so I knew exactly where he's coming from, I know the kind of darkness, the problems.

Movie Trailers
The Prom's Star-Studded Teaser Is So Fun and Extra, It Feels Like a Promposal
by Grayson Gilcrease 2 hours ago

by Perri Konecky 15 minutes ago

by Chanel Vargas 15 minutes ago