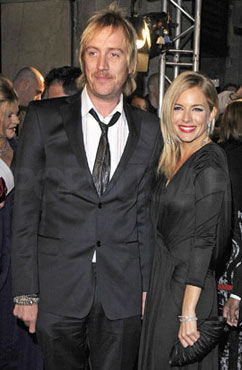 Even though they've been together for just a year, Sienna Miller and Rhys Ifans have had their fair share of drama. First there were the engagement rumors — which Sienna recently denied — followed by accounts of Rhys's jealousy over Sienna's party lifestyle and her continued friendship with ex-boyfriend Matthew Rhys. Now The Sun is reporting that Sienna has finally called it quits because Rhys's suspicions became too much to take. Take it with a grain of salt considering the source, but Sienna and Rhys have always seemed like an interesting match. What do you think — is this really the end for Sienna and Rhys?