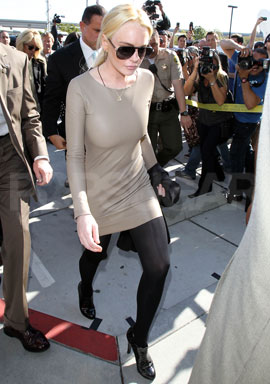 Lindsay Lohan picked a tight dress for her latest morning before a judge in LA this morning. She's facing possible prison time over a necklace she allegedly stole, and she was given an ultimatum during her last appearance in court in February that she'd have to pick either a plea bargain or trial. It seems no new ground was broken today, as her decision-making period was extended until March 25. Her first option is pleading guilty or no contest and serving three months in jail, or taking a risk of a multiyear sentence with a trial that would start on April 22. Lindsay has said that she wants to get back to work and move beyond her legal troubles, but first she has a choice to make. What do you think — should Lindsay take the plea or not?