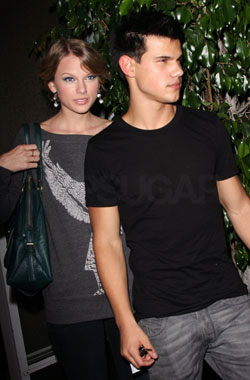 While Taylor Lautner is promoting New Moon internationally, his new girlfriend Taylor Swift is gearing up for her very first shot at hosting Saturday Night Live this weekend. This season almost every host — Drew Barrymore, Ryan Reynolds, Megan Fox — has brought on their significant other for a cameo in a sketch or Digital Short, so we're wondering whether we'll see Taylor Lautner pop up on Swift's show.

There are lots of rumors as to why none of the Twilight cast is scheduled to host to promote their movie and the timing works out well. Taylor L's schedule doesn't have him being in NYC this week and Swift talked about being nervous about the pitch meeting, but they could have filmed something already like a DS with Andy Samberg. So what do you think — is there a chance that Taylor Lautner will make a cameo on Taylor Swift's SNL this weekend?

Taylor Swift
Taylor Swift Wore a Sustainable Dress For Spring, and I Don't Know How It Gets Better Than This
by Karenna Meredith 4 weeks ago